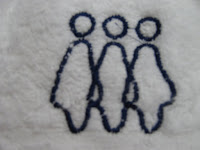 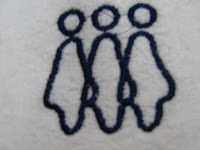 I had to embroider 80 towels for our Old Age Home. Basically to mark the towels in a "nice" way. I used the ACVV logo of a graphic design of three women. The problem was how to get a neat embroidery without the expensive use of a soluble stabilizer? Without it the loops of the towel made the embroidery unclear and unneat.

On 24 of the smaller towels with small loops this was not such a big problem. On the bath towels with the longer loops, I had to make a plan. I used a starch mixture to spray on the towel and then press the towel. I first use my iron. Then I decided it did not get it flat and dry enough. I used the press- but it made some coloured marks on the towels. I just hoped it will wash out. In the end I used the iron again and try to press the loops in the direction it naturally lay.

Although not as lovely as with a soluble product it still produced better results than no pressing did.
Posted by Marié du Toit at 8:11 AM 1 comment: